Save up to 75% off Canada Cruises

As a large-scale seller of Canada cruises and Canada vacations, we are able to offer you unbeatable prices and unparalleled value. With cruise line volume buys plus our low everyday prices you can save up to 80% versus the brochure price! Once you have found the discounted Canada cruise of your choice, please call our cruise consultants to book your vacation and save money with our first-rate personalized service! Book your Canada cruise today with AffordableTours.com, your discounted cruise headquarters. Learn more about Canada Cruises 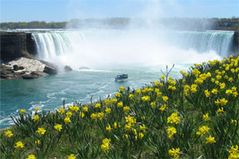 On a cruise of Eastern Canada, you'll dock at utterly charming ports of call that offer visitors plenty of opportunities to explore the towns' maritime history through informative walking tours and museum visits. Friendly folks at ports in Nova Scotia, New Brunswick and Prince Edward Island are eager to share their stories with you - or point you in the direction of the best local seafood restaurants!

Tiny Prince Edward Island, with its lush, pastoral landscapes is the setting for the classic novel Anne of Green Gables. Cruisers typically stop at Charlottetown, adorned with more than 150 flower pots in the summer months (don't forget your camera to capture the colorful scene). The province of Nova Scotia, which means "New Scotland," is a mix of cultures, including French, Gaelic, Arab, Eastern European and an aboriginal First Nations group of people called the Mikmaq, who were actually the first settlers on this island. Halifax is your port of call here, known for its rich maritime heritage and the pretty public gardens.

On the western side of the country, Vancouver, British Columbia, is the starting or ending point for many Alaska cruises. Take a day or two before or after your cruise to explore all this cosmopolitan city has to offer - from historic Gastown, to lush Stanley Park to funky Granville Island. Of course, there's no harm in just sitting on a park bench near the bay, watching floatplanes smoothly land and take off, and admiring towering snow-capped mountains that seem to descend into the sea.

Mon-Fri 8AM - 11PM ET
Sat-Sun 9AM - 9PM ET
Enter your information and an agent will call you back shortly.
*Please Note: Only USA and Canada residents