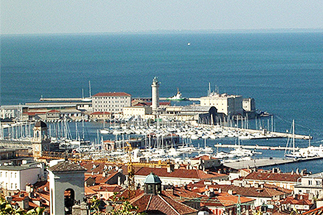 The Port of Trieste is located on the eastern side of Italy and borders the Adriatic Sea and Slovenia. It is the least quintessentially Italian town, and has more in common with Eastern Europe than Italy. Picturesque and once part of the Austro-Hungarian Empire, Trieste is a multicultural and metropolitan city with a unique blend of Italian and Eastern European cultures and famous for its coffee. The seaport boasts the Piazza Unita d’Italia, which is the largest seaside square in Europe, as well as beach resorts, historical cafes, Viennese coffee houses, museums, castles, and even ancient ruins.

Located in port at Pier IV