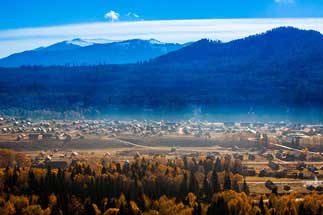 Xinjiang, is an autonomous region of the People's Republic of China. It is a large, sparsely populated area which takes up about a sixth of country's territory. The country has over 19 million in population. Xinjiang is known for its fruits and produce such as grapes and melons. Cotton, wheat, silk, walnuts, and sheep are also produced. Oil is another mineral that the city produces large amounts of.

A great place to visit is the Ancient City of Gaochang. This was built in the 2nd century and it became the capital of the Kingdom of Gaochang. It provides very interesting insight into this old ruin.

Heaven Lake is a lake surrounded by alpine meadows and snow capped mountains. Lush greenery surround the lake with clean air, fresh flowers, and a beautiful panoramic view. You can hike and bike on one of the many trails here. This is a must stop for everybody.